The Infiniti QX60 Finally Looks The Way It Should

The redesign is truly transformed 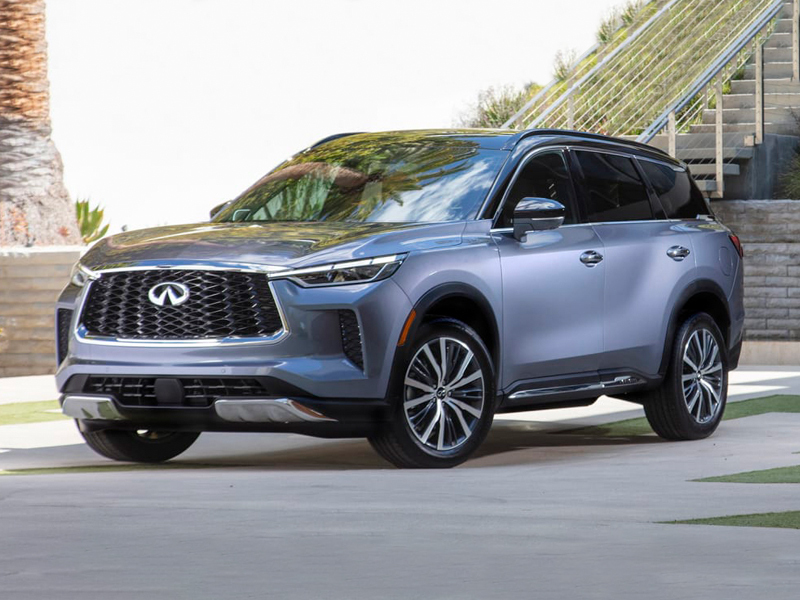 The QX60 is finally ready for the spotlight.

Infiniti has some catching up to do in terms of redesigns, and it can't come too soon. The QX60 three-row crossover was a decent vehicle, but it was getting as old as the hills. Introduced way back in 2013 as the JX35 (remember that name?), it was renamed the QX60 in 2014 and was facelifted in 2016. The fact that essentially the same vehicle is for sale nine years later isn't acceptable, and the brand finally did something about it. Here's the 2022 QX60, and it's about as significant of a redesign as we've seen in a while.

Based on the concept that bowed last year, it looks much better than the current QX60 and even better than we expected. It's more SUV-like in its appearance (the current one looks like a bloated wagon), and the styling elements are more modern and sophisticated. It still retains the brand's new design language as seen on the Q60 coupe, as well as on the QX50 and QX55 crossovers. The large mesh grille contrasts nicely with the thin LED headlights and the heavily creased hood edges.

What you see here is the top trim Autograph trim with its two-tone coloring giving it that floating roof effect. The rear of the QX60 has thin taillights, a twin bubble roof that ends with a spoiler, and what appears to be some weird faux exhausts. In terms of dimensions, the new QX60 has the same wheelbase as the outgoing model, but it's shorter and taller.

The QX60's interior is even more of a departure from the outgoing model than the exterior is. The new interior is pretty swanky, and it pretty much ditches every aspect of the old one. That's a good thing since the last one was bulky, plasticky, and pretty much horrible to use with its antiquated infotainment controls and crappy steering wheel buttons. The new dash sports the integrated HVAC vents, and there's a beautiful center console that sweeps down from the center stack. The quilted seats and dash on the Autograph trim are a visual feast.

In terms of tech, the screen no longer sits in the dash. The new 12.3" unit sits atop the dash, and there's a 12.3" instrument cluster (optional), as well as an available 10.8" head-up display. The new vehicle as increased sound deadening, a panoramic sunroof, three-zone automatic climate control, 8-way power and heated seats, and wireless Apple CarPlay and Android Auto. You can get the QX60 with second-row Captain's Chairs if you choose the Autograph trim.

The engine isn't different, but that's okay. The 3.5-liter V6 (295 hp and 270 lb-ft) is mated to a nine-speed automatic (thank goodness there's no CVT), and towing is an impressive 6,000 pounds, so you can take it on vacation with a trailer or a boat. FWD is standard, and AWD is optional. The new AWD system can send up to 50% of the power to the rear wheels, and its response is quicker, as well. Handling is improved with a new brake-based torque vectoring system.

The current QX60 is actually still a 2020 model, so there is now 2021. The new 2022 QX60 will go on sale sometime later this year, and it can't come soon enough. It competes directly with the Audi A7, Acura MDX, and the Buick Enclave. There's no news on the pricing, but it should be a little bit more than the current vehicle's $44,350. Whatever the increase, we have to say it will be more than worth it.