Is this thing beautiful, or what? 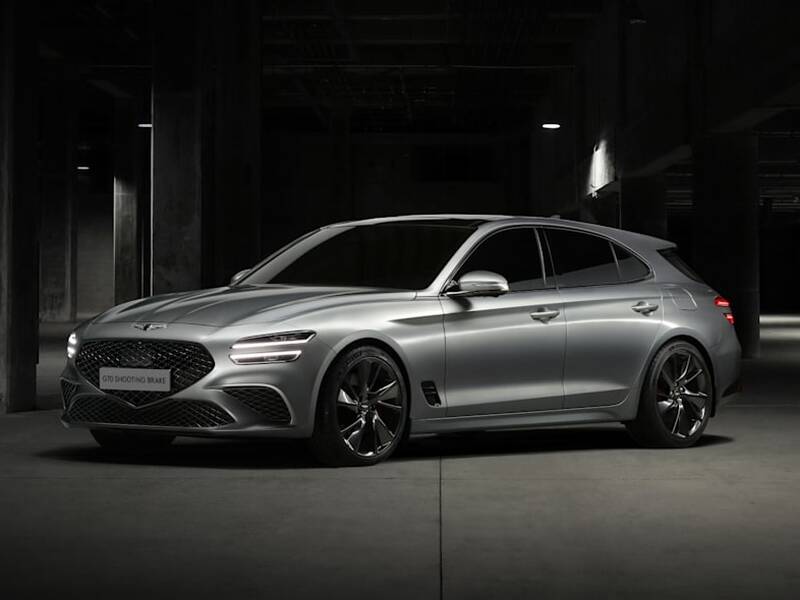 Another wagon America won't get because we have no taste.

Genesis just pulled the covers off their most stunning version of the new G70 in station wagon form. It's called the Genesis G70 Shooting Brake, and we have to say that we're biting on a stick right now to vent the frustrating fact that this beauty is never coming to America. Why? Well, we've said it before, and the sales stats prove that Americans don't buy station wagons (except for maybe automotive journalists because we love wagons).

Not much has changed except for the G70 Shooting Brake's added practicality and better back end design. It takes the refreshed grille, headlight, and taillight design of the 2022 G70 sedan and adds them to this shooting brake (which is technically a European two-door wagon, but the term has been added to overseas five door wagons just like "four-door coupe" has been added to American nomenclature for rakish sedans). Proof that it would never take off here is the fact that consumers are going nuts over the new Genesis GV80 SUV, which outsells all three Genesis sedans.

The overall length of the G70 Shooting Brake is the same as the sedan (184.4 inches), but it benefits from a whopping 40% more cargo area (15 cubic feet behind row two). Drop that second row flat, and the space jumps (although we have no figures). It won't be as capacious as a more traditional wagon since the rear glass is steeply raked for a more sporty look that shooting brakes are known for. We'll gladly give up the space to get our hands on this beauty. Look at the way the tailights have been modified on the Shooting Brake to creep into the liftgate. Awesome.

The refreshed interior of the G70 carries over to the wagon, and it's sublime.

The revised interior of the G70 for 2022 also makes its way into the Shooting Brake. We have no shots of the cargo area, but the single photo Genesis released (above) shows a seriously premium cabin. In terms of power, the G70 Shooting Brake will probably get the 2.0-liter turbo four-cylinder and 3.3-liter twin-turbo V6 option, as well as a diesel option for the European market. Hell, just to thumb their noses at us, it may even get a manual transmission. Damn, we suck. Will we see an even bigger, even sexier G80 Shooting Brake. We hope so (but also hope not because we wouldn't get that, either).

The current Genesis G70 is one of our favorite sports sedans. Read all about it in our full review: