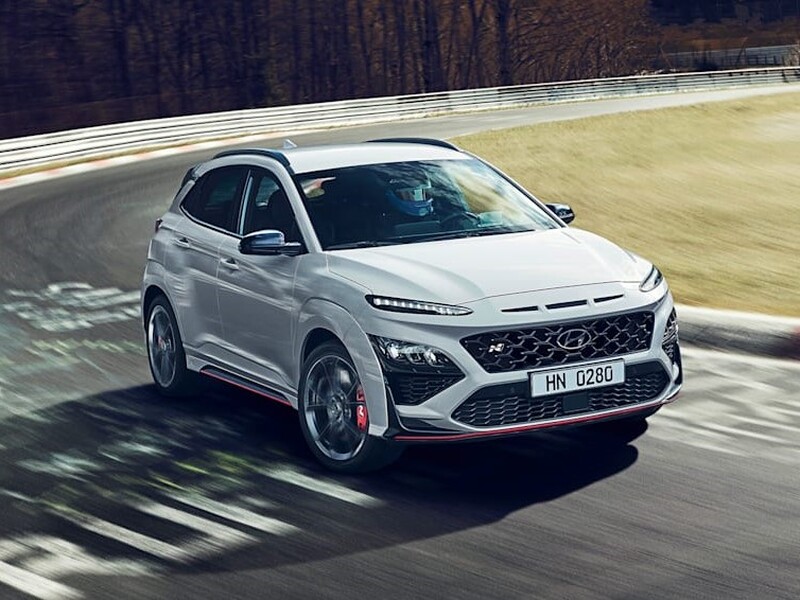 We just might abandon our sports sedan desires for this. Maybe.

If you thought Hyundai wasn't serious about performance, get a load of the just-unveiled 2022 Hyundai Kona N. As a follow-up to the excellent Veloster N released in 2019, the Kona N is the second dedicated performance vehicle from the brand, and it looks like it has the makings to get your pulse racing and, at the same time, get you to and from the office in comfort (and speed).

The refresh for the Kona allows the N to look sportier than it otherwise would have.

The engine will seem familiar since it's straight from the Veloster N: a turbocharged 2.0-liter four-cylinder that actually puts out a hair more horsepower. It puts out 276 horsepower and 289 lb-ft compared to the Veloster N's 275 hp and 260 lb-ft. The Kona N's overboost function bumps the power up 286 hp when the transmission is switched to the N Grin Shift setting. 0-60 will arrive in about 5.4 seconds, which is remarkably quick, almost as quick as a BMW M430i sports sedan.

Surprisingly, the Kona N is FWD only, compared to the Kona with optional AWD. The reason why it doesn't have AWD is because it would've added weight and cost to the Kona N, and it's supposed to be performance-focused, like the FWD-only Veloster N. There isn't another performance crossover at this price point, and Hyundai wanted it to be accessible.

The only transmission available is Hyundai's "8DCT" eight-speed dual-clutch automatic with N-specific gear ratios, durability enhancements and uniquely named settings: N Grin Shift, N Power Shift, and N Track Sense). The Kona N was actually tested at the punishing and difficult Nürburgring track in Germany. The stiffer chassis, bigger brakes, and sport-tuned suspension mean it's not just a racy-looking crossover. It has the stuff to make it tossable and fast around a track.

Hyundai's goal wasn't to make the Kona N a track beast that performs like a hot hatch. It had to keep a crossover SUV flavor while maximizing the segment's performance capabilities for the asking price. That's no easy goal to maintain a unique flavor that differentiates it from the performance hatchback version. What buyers get is more utility, more ground clearance, and more space for similar performance that feels different in the Kona N.

The Kona N is shorter than the Veloster N by about 2 inches (wheelbase and overall length). That might not seem like much, but the height of the Kona N is over six inches taller than the hot hatch. It's also 100 pounds heavier (3,340 pounds), which actually is less than we thought it would be. The manual transmission Veloster N is 200 pounds lighter than the Kona N (which only gets the 8DCT instead of an optional six-speed manual).

The cabin of the Kona N is sporty and actually nicer than the Veloster N. It eschews some of the cheaper hard plastics and also has a 10-inch infotainment screen and a digital instrument panel that has unique graphics for each drive mode. The Kona N also gets an available head-up display. These features aren't available on the Veloster N, so the Kona N certainly looks and feels more upscale.

The very sporty steering wheel has a red ignition button, paddle shifters, and those blue driving mode and N mode buttons that adjust electronic stability control and the limited-slip diff.

Pricing and availability haven't been announced, but we expect it to cost a few thousand more than the Veloster N's $32,250 base MSRP. The Kona N will go on sale sometime later this year or early 2022 as a 2022 model. The brand will follow these two N models with both additional N and N-Line vehicles, including gas and electric versions. We're just glad they're focusing on making enthusiasts happy and not just tree-huggers.