It took a while, but it was worth it 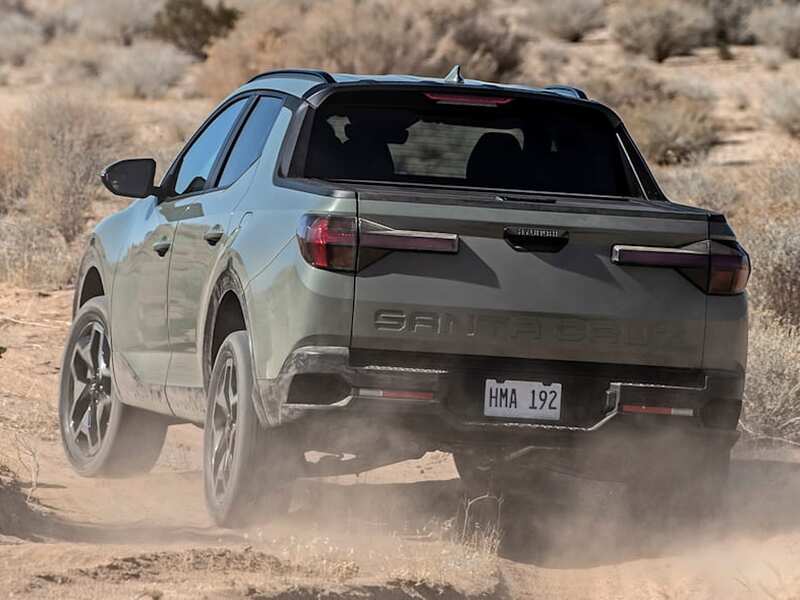 It's for those who want utility, style, and a bit of off-road fun.

Well, the world has waited a long time to see the production version of the Hyundai Santa Cruz, and here it is in all its glory. The result of a lot of planning, changes from the concept truck, and timing in the ripe pickup truck market has led to this. We have to say it's quite the sporty little truck, and we expect it will be well received by the car-buying public. Creased, folded, and edgy, the Santa Cruz is the right unibody lifestyle truck young customers have wanted.

It might not be a true off-roader, but it should be plenty of fun for the active set.

It won't compete in the midsize pickup segment because it's about a foot shorter than most of its competitors such as Chevy Colorado, Nissan Frontier, and the cult-favorite Toyota Tacoma. It's also lower than most of its stablemates, giving it a less truckish stance and more along the lines of the Honda Ridgeline. The bed is only 4.3 feet, about a foot shorter than the Ridgeline, which is significant, but will it be a dealbreaker for potential buyers? That is the question.

What the Santa Cruz lacks in bed length, it compensates for with nifty storage features under the bed floor and under the rear seats. Buyers can also opt for a roll-top tonneau cover that provides security via a built-in lock. It can transport 1,748 pounds of payload (660 in the bed), and it will tow 3,500 pounds in standard form with 5,000 pounds with the optional turbocharged engine.

The nifty DRLs are integrated into the grille pattern, a brilliant design feature.

It's front-wheel drive-based, but all-wheel drive is optional for both engines. The all-wheel drive system allows variation in the torque split from front to rear based on acceleration, cornering, and tire slip. When you dial it into Sport mode, the Santa Cruz gets more rear torque for a more spirited experience. The all-new Santa Cruz will also have optional off-road features like a center differential lock and hill-descent control.

Much of the interior carries over from the new Tucson crossover, and it looks great. There's an optional 10-inch digital instrument cluster and an optional 10-inch infotainment touchscreen with that cool vacuum tube graphic for some of the data. The Santa Cruz's based touchscreen is 8 inches, and Apple CarPlay and Android Auto are standard. Also standard are automatic emergency braking and lane-keeping assist, while blind-spot monitoring, adaptive cruise control with lane centering, and a surround-view camera are options.

The good news is that the wait between its official debut and sales isn't very long since the Santa Cruz goes on sale this summer. We don't have any details on pricing or official trim levels, but that information should come soon. We're excited to see the new entrant in the pickup segment, and we'll have more to report when we can actually get behind the wheel.