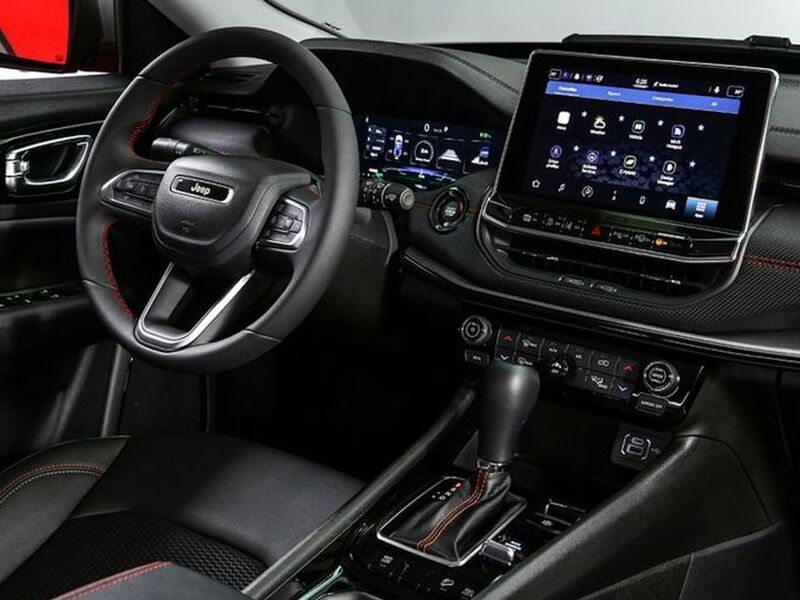 To say that we like the Jeep Compass isn't an inaccurate statement, but it's not a strong recommendation. While it might have great off-road chops, especially in beefy Trailhawk trim, its engine and transmission are rough and unrefined. What's more, the cabin suffers from an overly plasticky, bulky look that doesn't make seat time all that pleasant. We just caught wind of some of the cabin photos of the 2022 Jeep Compass that's slated for Europe, and the interior looks totally different from the 2021 model... in the best of ways. Let's take a look at them for comparison.

The 2021 model, really unchanged from the 2nd-generation Compass's introduction back in 2016 as a 2017 model, has an overly thick dash with a touchscreen set into it. The climate controls, likewise, are set in a bulky plastic setting in the center stack. Even the center console looks clumsy. The steering wheel is also straight from the '90s and in desperate need of some slimming down.

The refreshed interior of the 2022 Jeep Compass looks like a complete redesign. The whole dash has been redone with linear HVAC vents, a thin profile, and an attractive 10.1-inch (optional) touchscreen now sits on top of the dash rather than in it. The steering wheel is totally new (straight from the new Grand Cherokee and Wagoneer), and there's also a new optional digital instrument cluster. If you look at the climate controls, the buttons are now linear, and there are two knobs instead of three. It looks like the only thing that remains from the interior of the outgoing Compass is the actual shift knob, which is too bad. It's still that amorphous rubberized plastic job that should've been replaced.

The standard screen is a smaller 8.4 inches, but it's still a tablet style that looks better based on its graphics and positioning on top of the dash. The digital gauge cluster is 10.3-inches, and both systems run off the excellent Uconnect 5 version, which is attractive and responsive. Jeep also claims that interior materials have been upgraded, which is what we see in the above photos.

The changes to the exterior aren't as significant, but it does look better.

The refreshed Euro-spec Compass we see here does get new LED headlights and revised grille and lower fascia. Europe is also getting a PHEV called the Compass 4xe, but we're not sure if it will come to the states. Our guess is that the changes you see here will show up on the North American version, and that's welcomed news. Our guess is that we won't see any powertrain changes until the 3rd generation if Stellantis sees fit for the Compass to carry on. We expect to see the U.S.-spec Compass very soon.