Dare we say it's better than the concept? 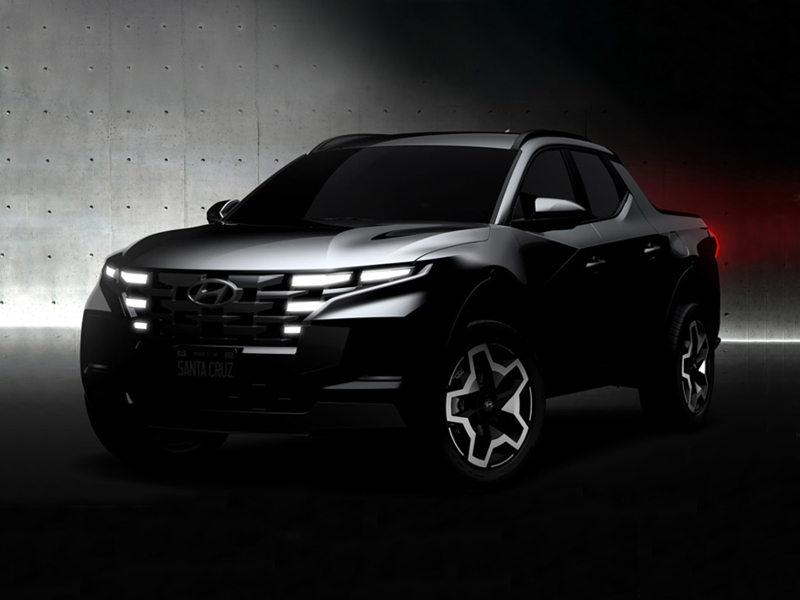 It's going to go head-to-head with the Honda Ridgeline.

We've covered the Hyundai Santa Cruz pickup truck since way back in 2017 when the concept debuted. It's been a long time coming, but we were hopeful because the brand greenlit the lifestyle pickup truck for production back in 2018. Hyundai just dropped a few darkened photos of the production version, and we have to say we're huge fans. It has actually changed tremendously since the concept, and we're elated that it has evolved nicely from a chunky beast to a sleeker but still rugged little truck. We've dropped in the production photos above each paired shot of the concept.

The first thing you notice is the cascade grille has gotten bigger and morphed into the same integrated headlight setup as the upcoming Tucson redesign. There are four lighting elements on each side, composed of bold LED daytime running lights (DRLs). The headlights and foglights are integrated in the large housings at the outer flanks. The angularity of the bumper is retained and even exaggerated a bit more in the production model. As a result, the whole front fascia looks more aggressive and contemporary.

The rear of the Santa Cruz in production form is almost completely different from the concept. T-shaped taillight elements are prominent within the larger housings, and there's a prominent lip/crease at the top of the tailgate. The lower curved bulge above the bumper of the concept has been replaced by a distinct crease, and now bold "SANTA CRUZ" lettering is embossed across the full width of the rear. Although we can't see the exhaust outlets on the production model, it's clear the exposed versions on the concept are gone. We can also see one outboard bed step integrated into the production model's bumper.

The differences in the body are also significant, although the shape of the concept is kept largely intact. . The front fender vent is gone, and the front fender bulge has been smoothed out. The long body crease that extends to the taillights of the concept now splits into a Y-shape on the front door. Rather than a small side door, the rear doors are now full-sized for practical reasons. The side windows are more upright now, but the uptick in the rear side windows is kept, as are the raked C-pillars. Conventional door handles replace the flush version on the concept. Any details on the lower half, aside from the wheels, are cloaked in shadow.

We don't have any teaser images of the interior, but we're expecting to see something similar to the new Tucson with a more open and linear layout but with some rugged touches. Hyundai stated that the Santa Cruz will have a “flexible bed for gear, cutting-edge connectivity, and a highly maneuverable all-wheel-drive platform.” The AWD system could be modified for “adventure-focused environments,” and there will be more than one engine choice. The all-new Santa Cruz bows on April 15th, and it should start selling this year as a 2022 model.