The past and the future of the Z in perfect harmony 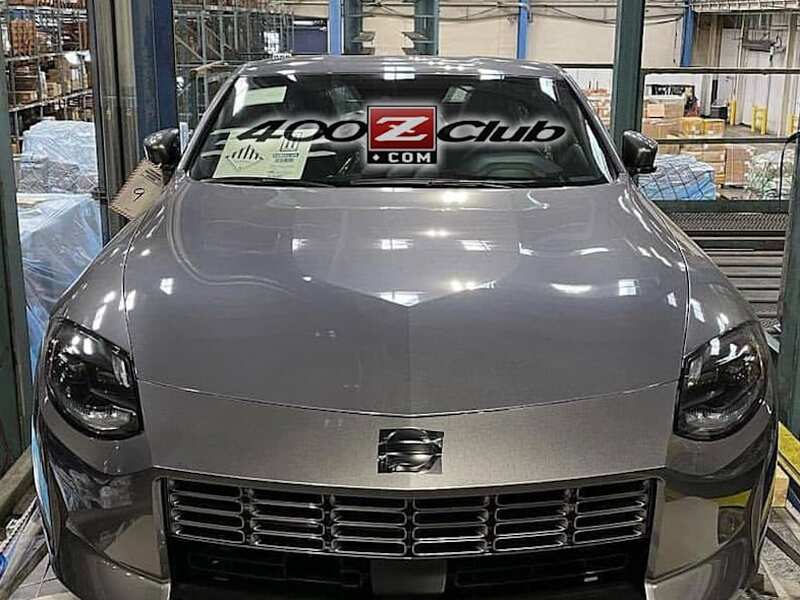 Somebody grabbed some great shots of the 400Z (images: 400ZClub.com)

Back in September of last year, we showed you images of the Nissan Z Proto, and we hoped the actual production version wouldn't deviate much from the concept car. It has all the right lines and also incorporated iconic cues from the likes of the 240 and 300 Z cars. Now, images of the production 400Z (which will be the official name) have hit the interwebs, and the car looks pretty much like the concept. Hell, we think it looks even better.

The headlights, hood, and fascia look the same as the concept. Beautiful.

According to 400ZClub, who nabbed the shots (and the video below) these are production versions from the factory. There are, in fact, two cars shown in these images. One is of a dark gray metallic, while the other is clad in silver paint. Both of them do a great job of showing off the fluid lines of the 400Z, and we have to say the car might just qualify as a new classic with its understated but truly sporty looks.

Apparently, the grille has some silver chrome surfaces, unlike the all-black grille on the Z Proto. This gives the front end a less flat look and provides some texture, as well as diminishing the size of the front fascia. The creases in the hood and the slop of the nose, as well as the shape of the headlights, pay homage to the '70s 240Z. It's obvious that the designers were intent on departing completely from the 350Z and the 370Z by harkening back to the glorious '70s, '80s, and '90s.

Not much of the concept's design changed at all in the production model, namely for the rear of the 400Z. The taillights are clearly inspired by the 1990-1996 300ZX, and we're happy to see the concept car's rear end make it to production. The only big change is the presence of a modest lip spoiler on the hatch of the 400Z. The car's rear haunches look muscular, and the wheels seem to fit the wheel wells nicely with only minimal gaps between them. The door handles are more integrated into the body of the car, compared to the large, protruding versions on the 350Z and 370Z.

The taillights' slim pill-shaped elements are derived from the 300ZX.

What isn't present is badging on the front and rear, which could just mean it's not finished final assembly, but there's also some tape covering the back end. It also appears that some black tape is covering the badges on the C-pillar (the silver Z logo). You can see that logo on the steering wheel below, and we're sure it will appear on the car's exterior when it hits showrooms (and when we get to drive it!).

This one's not a stick shift, but we do like the sportiness of the interior (minus the cardboard and plastic, of course)

You'll notice that the interior shows a left-hand drive car, which means it's probably slated for North America. The interior from the concept largely carries over to the production car, and that's a very good thing because it departs from current Nissan interiors (and definitely from the 370Z's dated cabin). There's a digital instrument cluster, a well-sized infotainment screen set into the center stack, and a nice four-spoke steering wheel with a thick rim and thumb cutouts. This particular car has an automatic transmission, but we do know a manual will be available. Woo hoo!

Here's a short video clip of the production 400Z:

Power will reportedly come from a 300-hp twin-turbo V6 from the Infiniti Q60 and possibly a 400-hp mill from the Q60 Red Sport. Both of those should prove to please enthusiasts and weekend track hounds. These will also pit nicely against the Toyota Supra (255 hp and 382 hp versions). We can't wait to see the 400Z in the flesh and get behind the wheel. We're waiting on pricing and specifications on the 400Z, but that won't come until later since the 400Z goes on sale in 2022 as a 2023 model. We're just happy Nissan is doing this next Z car right.