Another slick Korean EV hatchback is on its way 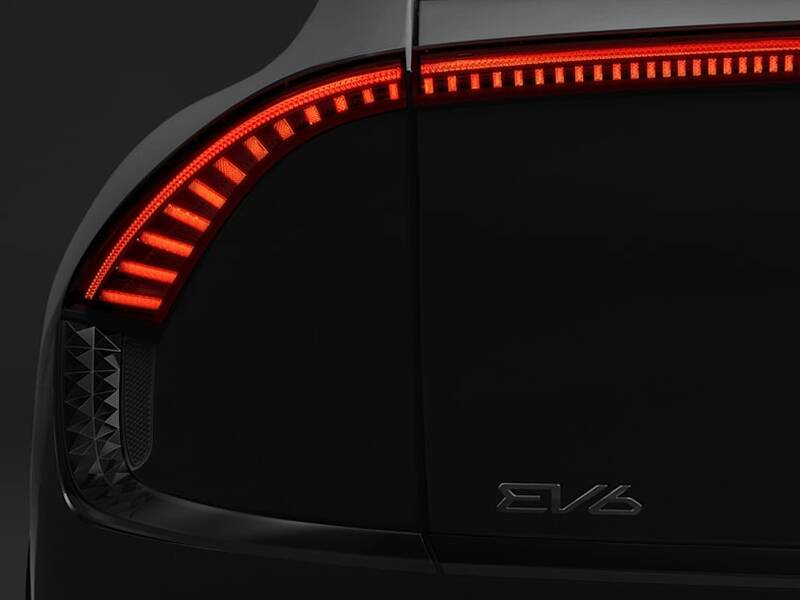 The taillights alone are worth the price of entry.

It looks like the Koreans are going hard after the EV segment, first with the Hyundai Ioniq 5, and now this tantalizing tease of the new Kia EV6. Based on the E-GMP platform that Hyundai and Kia are using, the new EV6 uses the same hatchback-style but with a more fluid look that has more of an exotic appearance than its retro brother.

The heavily creased bulges of the EV6's hood give it sports car look.

The Ioniq 5 looks boxier and angular, whereas the EV6 is more sculpted with more curves than angles and a rather fluid line from front to rear. The roofline is more aggressive, giving it a blend of fastback and hatchback. The body shows prominent curves in the hood and bulging rear haunches that should provide an overall sportier look than the Ioniq 5. Perhaps the most interesting part of the car is the arc of the taillight that drops into the rear fender. It almost has a mini-Porsche 911 Carrera ducktail spoiler look, a very nice touch. The turn signals are sequential LEDs, which should provide a premium element to its already high-end look.

The notched C-pillar looks a bit like the current Mazda3 hatchback.

It looks like the EV6 will have the same powertrain as the Ioniq 5: a 215-horsepower, 258 lb-ft. rear motor and rear-wheel drive or dual motors good for 302 horsepower and 446 lb-ft. of twist to all four wheels. The EV6 will have fast 800-volt charging and the external appliance charging capability. The battery capacities will be 58 kWh or 77.4.

It will also be similar to the Hyundai in terms of range, up to 300 miles on the WLTP rating system (approximately 267 miles on America's EPA system). While that's not Tesla-matching, it's definitely practical for most daily drivers. Of course, the need for increased EV charging infrastructure, along the lines of Tesla's huge network, is a valid concern that needs to be addressed sooner than later.

We think the EV6 design is better than the 2018 Kia Imagine EV concept.

The Kia EV6 reveal is coming next week, and we'll be able to judge it in full detail. Hopefully, there will also be photos of the interior. If it's anything like the new Kia Sorento's, expect very good things. The official reveal takes place on March 15th. It looks like the EV race is getting hotter by the month, and that's a very good thing for those who might be reluctant to leave gas behind.