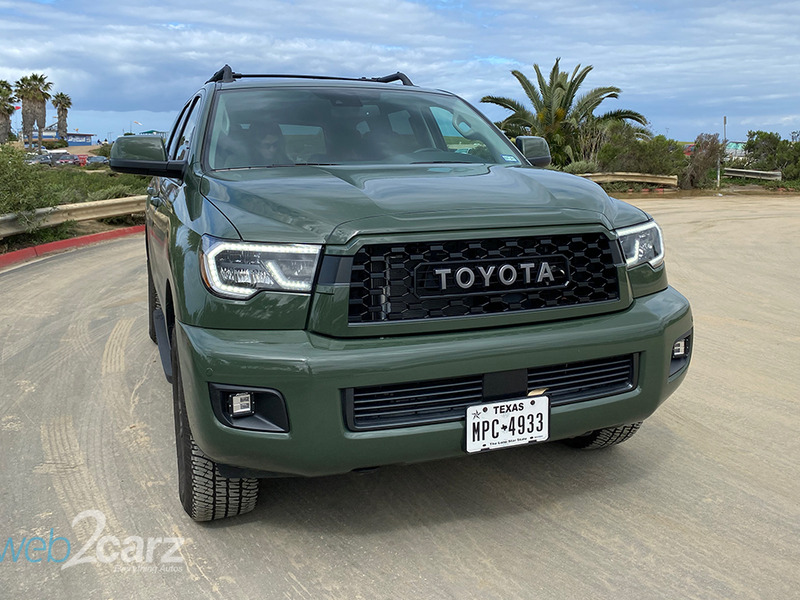 The Sequoia TRD Pro is pretty much the opposite of a Prius.

Toyota has been redesigning most of its passenger lineup: RAV4, Highlander, Corolla, Camry, and the Avalon. Its trucks and body-on-frame SUVs, however, haven't touched in any significant way. But they have been dressing them up a little with different trims, and the lastest one to get it is the Sequoia with its first TRD Pro package that makes the big guy more rugged and more menacing.

While it might seem unlikely for anyone to go off-roading in a hulking Sequoia, it's Toyota's way of injecting a bit more vehicular Viagra into the 12-year old body-on-frame SUV and to round out the TRD Pro line. We hung out with our whole family in the San Diego, CA area this past spring before COVID-19 hit en masse, and the 2020 Sequoia TRD Pro was our chariot for a week.

It Has Mammoth Presence

The Sequoia TRD Pro gets a new paint color appropriately known as "Army Green", which stands out in a crowd. Plus, it looks a lot more modern than the rest of the Sequoia palette in a very good way. When the Sequoia is clad in more refined colors, it actually looks older. The Army Green coloring, combined with the black wheels and trim bits looks superb. Way to go Toyota for doing something smart without having to redesign the vehicle just yet.

This Army Green color is actually exclusive to the entire TRD lineup, including the Tacoma, Tundra, 4Runner. The pricey Land Cruiser is actually the only body-on-frame vehicle in Toyota's lineup that doesn't get the TRD trim. Add in 18-inch black BBS wheels with red/black center caps, a large black mesh grille, a TRD roof rack, black square Rigid Industries LED foglights, and a smattering of TRD Pro logos on the front door and the rear liftgate. The Army Green grille frame actually helps mute the dark strips on the outer edges that actually look odd on other colors.

Believe it or not, the coloring actually makes the Sequoia TRD Pro look smaller than its standard Sequoia brethren. The preponderance of chrome on the regular Sequoia gets properly replaced on the TRD Pro version by body-colored trim on the bumper, grille, door handles, and mirror caps. While it doesn't make the Sequoia TRD Pro look wholly new, it does alter the look to the point of desirability for fourth-generation SUV design that's a few years older than my firstborn.

The Cabin Isn't Fancy, But It Works

The cabin isn't exactly airy and open, but it is purposeful.

If you expected posh digs inside the Sequoia TRD Pro, you'd be gravely mistaken. Not much has changed in the cabin, and the dated design and ergonomics rear their collective ugly heads. On the bright side, however, is the fact that the vast majority of the interior is actually pretty no-nonsense. In a world where everything is touchscreen controlled, the Sequoia TRD Pro is pretty much all physical controls except for some of the infotainment. The Entune system is dated (it doesn't adopt the new system in the Corolla, Camry, RAV4, and Avalon), but the large control buttons are easy to find and press. The 7-inch touchscreen is standard but could use even more upsizing in a world where 10+-inch screens are becoming commonplace.

The colossal climate control knobs might as are some of the best around with big knurled grips and reassuring actuation. HVAC vents are large, rectangular (unlike the Tacoma's round vents), and move a large volume of air quickly. Ironically, the audio knobs are like mini-marshmallows. They're annoyingly small and have a curved, smooth edge that makes them difficult to operate. The contrast between these and the climate control knobs is too stark.

Although the interior isn't even as nice as a base Ford Expedition, it's not all Spartan inside. The big leather seats are comfy and can handle occupants of all sizes. The 2020 Sequoia TRD Pro comes with great standard second-row captain's chairs and provide quick access to the third row, which has enough leg and headroom for adults. The third-row seats also get standard power-folding capability, which is super-convenient and a very nice feature to have when you have one arm occupied with kids' gear.

In terms of technology, the Sequoia TRD Pro gets standard Apple CarPlay/Android Auto compatibility, as well as Amazon Alexa, and a booming 14-speaker JBL Synthesis sound system. Navigation is also standard and comes in handy when you're out of town and don't want to consume precious data on your smartphone. On the downside, the Sequoia could really use more USB ports since there are a meager three in the entire cabin. Luckily, we charged up all our kids' tablets before we even hit the road. Please tell us adding a couple more USBs for the rear passengers was just too much, Toyota, but we still won't believe you.

Our Sequoia tester sure made the munchkins happy with ample room and big windows.

Taking the whole family on the road can be harrowing, especially when they're as rambunctious as ours. But the Sequoia TRD Pro, despite its off-road leanings, is great for the family. You never worry about the build quality or the comfort level. The Sequoia drives like a big bank vault in terms of solid construction. From the door handles to the seat adjusters, everything is put together remarkably well. Even though it's an old design, the interior of the Sequoia will last longer than other vehicles. If you can get past the chunky ergonomics, the thing is a tank.

Plus, the Sequoia comes standard with Toyota Safety Sense P, which is a serious set of active and passive safety features that help make the Sequoia up to speed for families. The set includes automatic emergency braking with pedestrian detection, lane departure alert with sway warning system, automatic high-beams, blind-spot monitoring with rear cross-traffic alert, and adaptive cruise control.

The huge tires and wheels are just part of the off-road componentry on the TRD Pro.

Lest you think it's just a cosmetic package, the new TRD Pro Package adds quite a bit to the mix in terms of off-roading bits. Toyota was mindful of doing things right with their largest TRD Pro vehicle just in case owners get adventurous on their outings. Toyota touts the TRD Pro trim on all its vehicles are far more capable off-pavement than its regular siblings, and we can see why.

The 2020 Sequoia TRD Pro gets Fox shocks in the front and back that have been tuned for the big SUV. The suspension travel increases by 0.7 inches, as a result, and both body control and ride comfort have been improved. We noticed that when almost fully loaded with people and gear, the Sequoia TRD Pro handles pavement and big bumps quite admirably, feeling more put together than the rest of the Sequoia line that's already pretty good.

There's also an optional front skidplate, just in case you take on the rough stuff. Our only chagrin is the running boards than might impede the breakover angle when going off-road, which we really didn't do much of other than some dirt roads. Furthering the TRD Pro's rugged resume are the standard two-speed transfer case and a center differential lock.

The engine remains the same, but it's a good one that's right-sized for the big rig. The 5.7-liter V8 has a voluminous 381 hp and 401 lb-ft of torque, and its six-speed automatic routes power to all four wheels. We never found the engine lacking, nor did it have trouble downshifting, and its responsiveness and power were very good, indeed.

Driving the Sequoia doesn't feel laborious or frightening as its size might suggest. We found it easy to go down the 105 at 85 mph in traffic without worry if we were in the center of the lane. Managing curvy off ramps or negotiating around small-ish drive-throughs. It's not what we'd call precise, but it manages its size and weight well.

A Capable, Albeit Dated Beast of Burden

At the end of the day, the Sequoia TRD Pro shined. It managed numerous trips to the beach (and tons of sand) with the whole family in tow. My wife didn't complain a single time as we drove to Legoland, the San Diego Zoo, numerous trips to the grocery store, and last of all to go find toilet paper just as the COVID-19 panic started to hit California. The changes to the Sequoia with this TRD Pro trim don't modernize the SUV, but they certainly make it more attractive to buy.

Big, thirsty V8 engines are becoming more scarce. We're glad to see it in the Sequoia.

The price isn't cheap. With a base of just over $64,000, the Sequoia TRD Pro still a big pill to swallow. That said, there are so few rugged body-on-frame seven-passenger vehicles out there now, so the Sequoia TRD Pro makes its case convincingly. If the latest tech, superb interior design, and fancy amenities are important to you, keep looking. If you want an SUV that looks tough, is tough, and will last without skipping a beat, you'll want to take a serious look at the Sequoia TRD Pro.

The 2018 Toyota Sequoia managed to pull off a solid score. Consider a used one for your next family vehicle as you read our review below: