The 4x4's devotees will love this thing 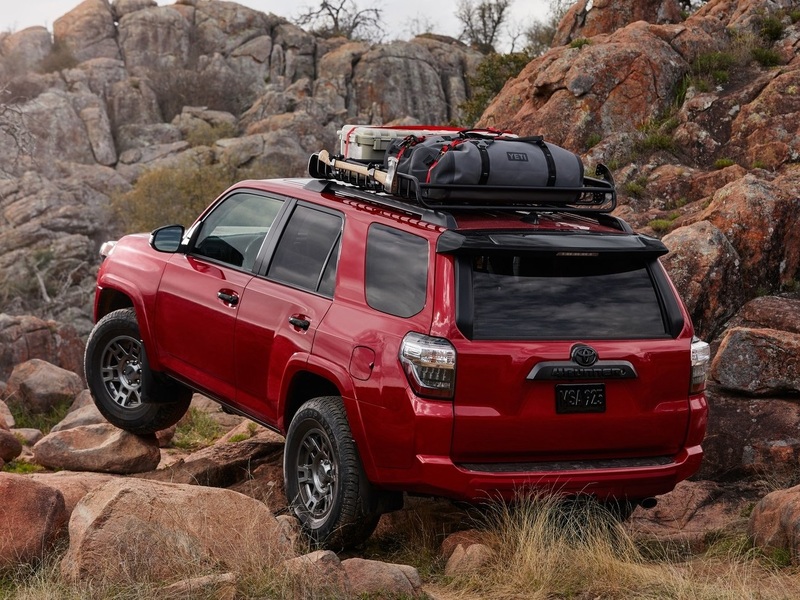 This is the 4Runner's natural environment, and it's great at it.

We love the 4Runner not because it's fresh and modern (the 5th and current generation is a decade old) but because it's no-nonsense and tough-as-nails. Who cares if it's as old as the hills? It can certainly take them on with ease. Now, Toyota has brought us a special edition known as the Venture Edition, and it's meant to appeal to those buyers who love the off-road and overlanding lifestyle, as well as extends the vehicle's life by adding some attractive trim bits to dress things up a little bit.

The engine is the same, the 4Runners capable 4.0-liter V6 with 270 hp and 278 lb-ft of torque. But it gets a fancy and capacious Yakima Megawarrior roof rack that holds even more gear than the already large 89.7 cubic feet of cargo space inside the 4Runner. The black powder coated rack makes it easy to strap down gear boxes and bags, tents, etc. so you can go off-grid without skipping a beat. It also helps when you want to take more than two people because you can move most of your cargo to the outside of the vehicle.

On the body of the Venture Edition 4Runner, there are darkened trim bits such as mirrors, door handles, a rear spoiler, bumper, fog light surrounds, etc. Chrome badges also get replaced by blackened versions, a very nice touch that rounds out the more serious look and matches the Yakima roof rack, too. But our favorite part is the dark gunmetal 17-inch Toyota TRD wheels. They're a perfect match for the Venture's look.

That's a lot of gear on the new Yakima roof rack that comes standard on the Venture.

The 4Runner Venture Edition also comes with a two-speed transfer case to manage challenging off-road duties, and the manually selectable rear lock will help when there's slippage on a precarious incline. The 4Runner remains one of the most capable four-wheelers on the market, and it's where the vehicle shines regardless of how dated the design might be.

Please don't try this with your unibody family crossover.

We don't have photos of the Venture's interior, but there are some changes such as TRD stitched logos in the headrests, a rear cargo mat, and all-weather floor mats. The Venture Edition comes standard with SofTex seats, which are easier to clean than cloth or leather and promise to hold up remarkably well without special treatment. And they come standard with heat in the front. The Venture Edition also benefits from the 2020 4Runner's new Multimedia System with its 8-inch (up from a small 6.1-inch version) touchscreen, Apple CarPlay, Android Auto, and Amazon Alexa Compatibility.

The Toyota 4Runner Venture Edition’s price tag is $45,405, only $2,000 more over the top trim 4Runner TRD Off-Road Premium. The extra tidbits added to the 4Runner to create the Venture Edition easily cost more than the $2,000 increase in the asking price. And while you might not get an advanced vehicle with all the latest features, you do get a seriously reliable and very rugged SUV that's sure to last for years, and it gets more visual punch than even the standard TRD version. We think it's worth a look for those buyers who will actually take it off the beaten path.